Why banking Trojans are dangerous

Virus writers are constantly developing new techniques to steal money by bypassing security systems. The most common attack vectors are those that:

In many cases after a successful attack, intruders corrupt the file system on the hard disk to cover their tracks.

The most dangerous and widespread banking Trojans (number of definitions in the virus database for 2013):

Attackers often use malware for Windows in combination with Trojans for mobile platforms, especially for Android.

Below you can find brief descriptions of the most dangerous banking Trojans.

This malicious program steals passwords from remote banking programs and electronic trading platforms. It possesses the ability to:

Bypass security control and monitoring software and disable anti-viruses. Infected systems can be linked into a botnet.

This banking Trojan can forward data, entered by users in web forms or e-banking programs, to criminals. Key functions involve the following:

This malicious program is also known as Zeus and Zbot. It steals passwords in infected systems. This Trojan is capable of:

This Trojan is also known as SpyEye. It is capable of the following:

Trojans of this family provide criminals with access to compromised computers. This Trojan is capable of:

With a 20KB executable file, this is the smallest of the famous banking Trojans. It is also known as Tinba (Tiny Banker). The main purpose of this malware is to monitor Internet traffic to intercept sensitive (including banking) information and send it to criminals. This Trojan is capable of:

Multi-component malware that can steal confidential information, including e-banking authorization data; rob money from accounts in electronic payment systems; and inflict damage on the file system of an infected computer. Executes commands issued by intruders.

This Trojan is designed to steal passwords and other confidential information, especially data related to accessing e-banking systems (including those that use smart card authentication). This Trojan is capable of:

There are banking Trojans for Android. , the first one to be discovered, appeared in 2011. If a user's computer has already been compromised by SpyEye, their mobile device is at increased risk of becoming infected by Android.SpyEye.1. When a user visits a bank site whose address is present in the Trojan horse's configuration file, the malicious program injects contents, such as text and web forms, into the web page. Thus, when an unsuspecting victim loads into the browser of their desktop or laptop PC a web page belonging to the bank in which they have an account, they will see a message stating that the bank has implemented new security measures, and that the user must adhere to those new measures in order to gain access to the Bank-Client system. They are also advised to download a special application containing a Trojan to their mobile phone.

A fully functional banking Trojan for Android. Designed to intercept information in SMS messages from online banking systems in Russia.

The Trojan can intercept and forward all incoming SMS messages to attackers or hide them on a compromised phone. The Trojan would be installed on the phones of users whose computers were infected with Trojan.Carberp banking malware (when attempting to use the bank's services through a web browser, users are notified by Trojan.Carberp that they need to log in from their mobile phone, and to do that, they need to install a special application onto the mobile device).

How do banking Trojans steal data?

How do banking Trojans spread? 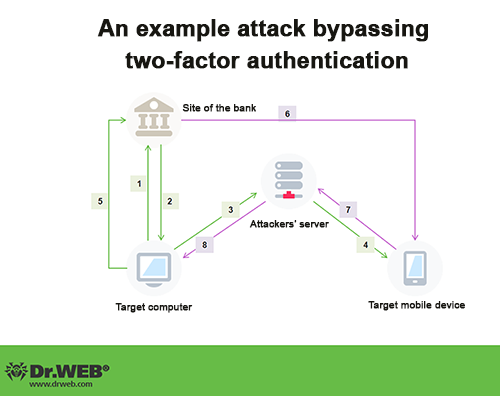